As an employer, trying to navigate the laws that govern employee background checks can be tricky.

However, for the companies conducting these background checks, they can represent potential legal and regulatory liability.

These are the “big rocks” of which businesses absolutely must be aware.

The Fair Credit Reporting Act (FCRA) was originally enacted in 1970 to protect consumers, including allowing them to dispute inaccuracies in their credit reports. Today, the FCRA is a key regulatory obligation for employee background checks. Specifically, the FCRA requires that employers inform and get consent from applicants and employees prior to conducting background checks, that they allow the subjects of background checks to review the results and correct any inaccuracies if an adverse action is to be taken, i.e., denial of employment.

The key concept to keep in mind with the FCRA is that it doesn’t necessarily impact whether an employee background check can be conducted; rather it regulates the manner in which such checks must be conducted. 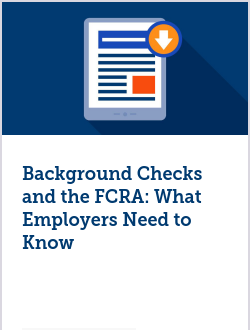 Under the FCRA , Credit reports are included, not only as a portion of a consumer report, but there are additional requirements within the act that CRA’s must adhere to.  Credit reports search nationwide through the major credit bureaus. Credit reports include information about an individual’s bankruptcies, tax liens, judgments, accounts in collection, negative accounts paid or charged off, and active accounts. Keep in mind that some states and localities provide additional restrictions on an employer’s ability to use credit information for employment purposes.

In addition to the FCRA, there are a number of state and local consumer reporting laws that may impact employers, some of the most comprehensive being in California.

There are two related laws that employers in California (or those hiring people from California) also should be aware of:

California, often known to have some of the most restrictive employee relations laws in the country, went beyond the requirements of FCRA in passing the Investigative Consumer Reporting Agencies Act (ICRAA) in 1975. The ICRAA specifically addresses any investigation into consumer reports that might contain information related to an applicant’s character or reputation.

California also enacted the Consumer Credit Reporting Agencies Act (CCRAA), which is also separate from the FCRA and addresses requirements for notice and consent when seeking either employee or applicant credit information that may not be covered by the ICRAA.

California may have particularly robust laws around consumer reporting, it is certainly not the only one. It would be too lengthy here to provide a review of each state’s requirements, but suffice it to say employers should be aware that it is not just federal laws they need to be familiar with when conducting background checks.

At the state and local level, many governments have enacted some form of “ban the box” law. These laws prohibit employers from asking applicants about their criminal history or regulate what information can be collected and how it can be used. In fact, according to Nolo.com: “More than a dozen states and the District of Columbia, as well as many cities, have passed these types of laws in the past few years.”

These laws have arisen to address concerns that asking about criminal history too soon may lead to disparate impact for certain populations—as well as the understanding that not all criminal behavior can nor should impact an individual’s ability to seek employment. Many major employers, in fact, have banned together in an effort to raise awareness of the issue and to ramp up their own efforts to ensure that certain groups are not marginalized.

IMPORTANT: Does your city or state have a Ban-the-Box law? Check out our interactive Ban-the-Box map.

Drug testing is a fairly common practice among many employers, including screening for marijuana use. But as more and more states legalize recreational and medical marijuana use, the state of Nevada and municipalities are also making it illegal to screen some employees for marijuana or THC use. Three more states – Illinois, New Jersey, and New York – prohibit adverse action against employees due to their recreational use of the drug outside of work. 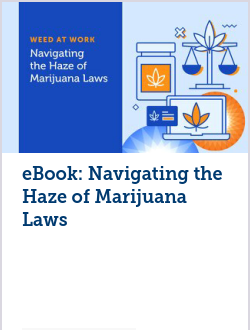 According to SHRM: “Employers that drug test typically use a five-panel screen that includes amphetamines, cocaine, marijuana, opiates and phencyclidine (PCP). Some employers, however, have dropped marijuana from the panel.”

However, there are certain heavily regulated industries where drug screening is required, such as transportation, nuclear energy, and military contracting.

Many state and local governments may have passed laws that impact an employer’s ability to drug test or use certain drug test results, so it’s important to understand the requirements in the states and municipalities where you are hiring employees and where they will work. Due to the complexities, it is always recommended to consult legal counsel before implementing a drug testing policy.

The Americans with Disabilities Act (ADA) protects employees from discrimination based on physical or mental impairment and applies to employers with 15 or more employees. The ADA prohibits employers from using medical information, or even the fact that an employee or applicant previously filed a workers’ compensation claim, as a means to discriminate against them.

Of course, for many jobs, physical ability may very well be a legitimate factor in a candidate’s fitness for the position. As a general rule, the ADA does allow employers to ask about an employee’s ability to perform specific job functions. The ADA also prohibits requiring a pre-employment physical, although it does allow employers to request such a physical after a contingent job offer has been made.

Title VII of the Civil Rights Act is a federal law that prohibits discrimination against employees based on race, color, national origin, sex or religion, among other characteristics. The law applies to both public and private sector employees with at least 15 employees.

While most employers might think it’s straightforward enough to not engage in such discrimination, Title VII has been used to challenge employment policies that disproportionately impact certain groups, regardless of whether the policy explicitly targets that group.

For example, courts have found that a rigid prohibition on hiring anyone with any criminal record can have a discriminatory impact on black applicants as discussed under the Ban the Box section.  It is important for employers to review their screening policies regularly and include an individualized assessment, i.e. consider the facts and circumstances of the crime, the age of the case, and the age of the individual at the time of the crime when making hiring decisions.

Similarly, as with the ADA, employers need to make sure that their background checks do not delve into, or take into consideration, issues related to any of the protected categories under Title VII when making employment decisions.

Laws that govern employee background checks serve an important purpose aimed at preventing discrimination and protecting the privacy and medical rights of applicants and employees. However, for employers, these laws can seem complex, numerous, and overwhelming. While it would be extremely lengthy and complicated to lay out the nuances of every local, state, and federal law regulating employee background checks, the five laws in this post provide a solid starting point for any employer to understand what they can and cannot do and ask when conducting background checks.

This post is not offered as or intended to be taken as legal advice. Employers should consult with their HR departments and/or attorney to fully understand their specific obligations with respect to employee background checks.